Feelings of sadness, nostalgia and gratitude washed over me when I learned of the imminent retirement of pianist Radu Lupu, one of my favorites.

Sadness, because it closes the book on a career lit by performances that fused poetry, inwardness, questing intelligence, spontaneity and refinement.  There’s no one today who I’d rather hear in the piano music of Schubert, or Brahms.

Nostalgia and gratitude, because I happened to be in London last February, and snagged a ticket to hear him play Beethoven’s Fourth Concerto in the Royal Festival Hall, with the Philharmonia Orchestra.  Seeing him walk haltingly toward the keyboard, seat himself at his trademark chair, then quietly unfurl the opening solo phrase as beautifully as ever…could this have been my last chance to hear him “live”? 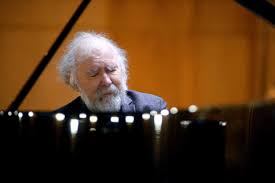 The audience’s sustained ovation at the end – 7 or 8 curtain calls, uncharacteristic for a London public which usually accords a maximum of three for an exceptional performance – brushed aside a few imperfections.  It reinforced a sense that this audience was thanking him not just for a singularly beautiful rendition, but for an entire career.

Lupu responded with a single encore:  Brahms’s Intermezzo in E-flat, Opus 117, No. 1, played with dream-like eloquence.  With his white hair and full white beard, pianist and composer seemed to merge into one.

After I first encountered Lupu many years ago, it took a bit of time to appreciate fully his artistry, the distinctive haunting lyricism and tonal beauty.   What struck me later as introspection seemed more like eccentricity that could run counter to the “voice” of the music.  (I think in particular of a Brahms D-minor Concerto in London in the early 1970s.)

With time, I understood Lupu as anything but eccentric… rather, he was searching.

We presented three recitals by him on our series at the Ford Centre in Toronto during the 1990s, all of them unforgettable:  Schubert, Schumann, Janacek, Bartók…

Now 73, he remains a modest musician with an exceptionally lively imagination.  Offstage, he can be self-deprecating and drily humorous; observant, and filled with humility before the works he interprets.

Fortunately, there remain the many wonderful recordings.  Has Lupu’s CD of solo Brahms, including the late Intermezzi and two Rhapsodies, Opus 79, been surpassed?  and I recently watched and marveled at his video of the Mozart Concerto in F, K. 459, with the Deutsche Kammerphilharmonie (Munich) and David Zinman conducting.

Equally distinguished as a chamber musician and Lieder partner, his departure from the concert stage leaves a big gap.